Arachnoid is a recurring enemy in the Mighty Max series, first appearing in the Doom Zone Mighty Max Trapped by Arachnoid.

A four-armed spider creature, Arachnoid resides in a dark, dank lair with webs covering the entire area. His uses his protein processor to feed his creation, Creep, any unsuspecting victims. Once Max is teleported inside, Arachnoid tries to catch him in his webs, but Max is able to escape. He destroys the protein processor, which destroys Arachnoid's lair and presumably kills him and Creep.

Arachnoid appeared in the episode Along Came Arachnoid. He was voiced by Rene Auberjonois.

Though Arachnoid himself was presumably killed when the building exploded, his giant spider appears in the last two episodes and kills Norman. 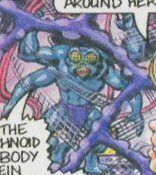 Add a photo to this gallery
This article about a specific character is a stub. You can help by expanding it.
Retrieved from "https://mightymax.fandom.com/wiki/Arachnoid?oldid=4847"
Community content is available under CC-BY-SA unless otherwise noted.