Lava Lord is a major antagonist in the Mighty Max series. He first appeared in the large playset Mighty Max Blasts Magus.

Lava Lord served as a minion of Skullmaster until he found the opportunity to overthrow his master in his weakened state. Lava Lord then used his creation, Magus, in an attempt to capture Mighty Max and steal the Cosmic Cap.

Lava Lord later returned with an upgraded version of a Lava Beast.

Lava Lord was originally the ruler of Skull Mountain before Skullmaster overthrew him and imprisoned him in stone. When Max destroyed the Crystal of Souls in The Maxnificent Seven, the spell containing Lava Lord was broken and he was freed. The Lava Beasts formerly under Skullmaster's control as slaves returned to Lava Lord and helped him build an ultimate weapon to get his revenge on Skullmaster, the giant robot Magus. Seeing Max, he agrees to join forces with Max since Skullmaster fears him, however he obviously only sees Max as a worm and just a figurehead ally.

With tactical advice from Virgil, however, Skullmaster's troops managed to knock Lava Lord out of Magus and Max and Norman hijacked it. Ultimately they abandoned the robot, which went over a lavafall. With this, Lava Lord develops a grudge against Max for destroying his prized creation.

In the series finale Max goes to Lava Lord for help against Skullmaster as Norman is dead and Virgil's been captured. Although Lava Lord is furious at Max for destroying Magus before (which had since been rebuilt), he hated Skullmaster more and agreed to help Max. Lava Lord used Magus to attack Skullmaster at Stone Henge, where Skullmaster used his powers to call up Fuath who though he put up a fight was ultimately shattered by Magus. However, Skullmaster then used his Crystal of Souls to force Magus and Lava Lord back underground.

Lava Lord is part of the second wave of Shrunken Heads. The official description reads:

Max is face to face with danger! He's got to face Lava Lord, master of the underworld and keeper of Skull Mountain. He's hot stuff! Will Max's axe help him carve a way out of this one...? 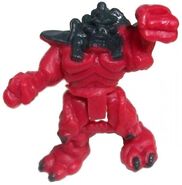 Add a photo to this gallery

Retrieved from "https://mightymax.fandom.com/wiki/Lava_Lord?oldid=5072"
Community content is available under CC-BY-SA unless otherwise noted.