Ravendark is an enemy of Mighty Max, from the Doom Zone Mighty Max Slays the Doom Dragon.

The self-proclaimed grand sorcerer of the powers of night, Ravendark wished to use Max as a human sacrifice for his evil magic. He attempted to flay Max with his sword as soon as Max teleported inside his cave, but the Mighty One uses his slingshot to hit the magician in the head with a pebble. Max ran, but Ravendark sent his Doom Dragon after the boy. Max managed to dodge the Doom Dragon and grabbed Ravendark's Book of Doom, the key to his powers. He tossed it into a slime pit, which destroyed Ravendark's cavern and presumably Ravendark himself.

Ravendark appeared in the episode Let Sleeping Dragons Lie! A servant of Loki, a Norse God, Ravendark was cursed by Odin to live as a bird. However, the curse did not work when Ravendark was inside the Cavern of Doom. He was ordered by Loki, who turned out to be Skullmaster, to awaken the Doom Dragon, which would bring about the end of the world. Max, Norman, and Virgil attempted to stop Ravendark from carrying out the spell, but failed, and the Doom Dragon woke from his slumber. While Norman battled the dragon, Max tried to reason with Ravendark, telling him that his master was really Skullmaster and he was lying about his promise to break the curse. Ravendark refused to believe Max until he left the Doom Dragon's body, which made him revert back to a bird. He then agreed to help Max and Virgil put the dragon back to sleep out of revenge. The trio managed to teleport inside the Doom Dragon's stomach, which brought Ravendark back to his human self. Skullmaster revealed that the only way to stop the Doom Dragon would be with Ravendark's blood and soul. Max tried to stop Ravendark, but the magician teleported him and Virgil out of the dragon and proceeded to commit suicide with a dagger, turning the Doom Dragon back to stone. He was voiced by Jim Cummings.

Fans have speculated that Ravendark is the same character as Doom, who later became a recurring villain in the toyline.[1][2] Doom appeared in the second wave of Shrunken Heads, the Heroes & Villains #4 set and an unreleased Battle Fortress playset that would have been part of the Mighty Max: Into the Battle Zone line. 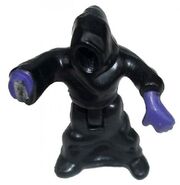 Add a photo to this gallery

Retrieved from "https://mightymax.fandom.com/wiki/Ravendark?oldid=4533"
Community content is available under CC-BY-SA unless otherwise noted.