The primary villain of the series and the arch-nemesis of the Mighty One, Skullmaster is an ancient warrior-sorcerer whose cunning, relentlessness, lust for both power and influence and his own limitless ambition has driven him to destroy at least two civilizations, the Lemurians and the Atlanteans. He destroyed the Lemurians out of wrath when they would not give him the secrets of the key, and he used the souls of Atlantis to power his Crystal of Souls. At some point, Skullmaster was imprisoned deep within the earth, where he sealed the reigning king, Lava Lord, into solid rock and took control of his minions. During the second season, Skullmaster is free to roam the earth and proceeds to cause all kinds of trouble.

Skull Master is part of the second wave of Shrunken Heads. The compact is a miniature version of Skull Master's head, while the inside is a small cavern with a sculpted Skull Master inside the top wall. The official description reads:

Max is face to face with danger! Max's nemesis and the ultimate evil. Ready for the final battle, Skull Master lurkes in his lair on Dragon Island, armed only with a sword. Will Max escape the evil one again...? 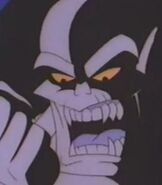 Add a photo to this gallery
Retrieved from "https://mightymax.fandom.com/wiki/Skullmaster?oldid=5001"
Community content is available under CC-BY-SA unless otherwise noted.