Virgil is a scholarly fowl and the guide for Mighty Max.

Virgil first appeared in the Battle Warrior Battle Conqueror alongside Max and Norman.

The last living Lemurian, the next step in human evolution, as revealed in one episode. The Lemurians either created or discovered the portals, and later created the key in order to access them. Having a bird-like appearance, the Lemurians valued knowledge above all else and compiled the most extensive library the world has ever known. They were destroyed by Skullmaster in his quest for the key. Virgil is over ten thousand years old, and is very knowledgeable about both the past and future. However, the majority of his trust rests on his ancient texts, and he seems to lack compulsion. Virgil is always serious, and quite often frustrated by Max's carefree ways. What's more, although he looks like a talking chicken and is often referred to as such, he keeps insisting that he is actually a fowl. It should also be noted that Virgil was Skullmaster's teacher, and he is often reminded of this fact.

Virgil appeared regularly in The Adventures of Mighty Max.

In other media[edit | edit source] 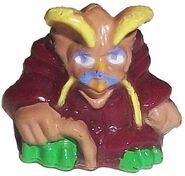 Add a photo to this gallery
Retrieved from "https://mightymax.fandom.com/wiki/Virgil?oldid=4989"
Community content is available under CC-BY-SA unless otherwise noted.